How Will We Know When She Is Dead? 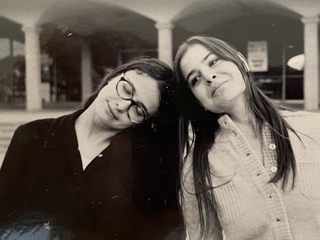 We were college students in the early 1970s. Judy is on the right, that's me on the left.

Sisters ordinarily have a special bond, but ours was strengthened by the traumas and losses we experienced as kids, as the two children of a famous author and his beautiful but deeply disturbed wife. Only we could understand how that was for us. Only we could deconstruct it, a process that was healing, fascinating, and immensely difficult.

When my sister, Judy, was first diagnosed with breast cancer in 2002 she began a maniacal writing marathon. She wrote late into the night, every night, fighting the side effects of the chemo, trying to make sense of her life, her history, and her cancer.

She was terrified that she was running out of time and she had so much to say. She wanted a retrospective look at our shared childhood, our estranged parents, the toxicity of the home(s) in which we were raised, and who we became as we became college students, lovers, wives, and mothers. She wanted to understand how she and I sheltered each other from the wild storms of our family.

As she wrote, terrified and maniacal in her illness, I wrote nothing.

Ten years later, in 2014, the cancer roared back, like a train that lost its brakes. And this time I was the one terrified that we would run out of time to figure it all out together. I had the overwhelming compulsion to write our story, my story.  No one else knew the truth of our childhood experience, and I wanted to share it with her, to validate her truths, and speak my own. I wanted her to acknowledge how different our experiences were, and how much they were also the same.

It was a discovery, a revelation to read each other's stories. Even though we grew up together and were close in age, and we each thought we knew each other's heart, that our hearts beat in unison, even so, we were amazed that our memories and experiences were often so different.  We each believed our memories were completely accurate but accepted that the other remembered it differently. We decided to weave our stories together.

When she died in 2016, our work was not yet finished. How Will We Know When She Is Dead? is my story of two sisters who helped each other survive.

Sometimes she wrote about something that I am certain happened to me as if it were her memory. She acknowledged that since I was eighteen months older, I probably remembered more accurately. I acknowledged that her memories were steaming with raw emotions, while mine are less charged. We would laugh about this and decided we didn't have to agree.

Memory is funny that way. You can trust it to some degree but also accept that it's reshaped over time. There is no absolute reality. The reality is the totality of what she and I believed together. What never changed or varied is the solid constancy of the love that bound us.

Every time we tell a story it might change just a bit, and then we remember it that way. But memories are also shaped by temperament and by our personalities. Judy had a tougher time from the day she was born, and was more cynical, pessimistic, and skeptical than I was. She had a hot temper and never backed down from a fight. I probably benefited from the fact that my parents still loved each other, and both loved me when I was born. Even with all that followed, those first few months shaped me differently. I was more gullible and trusting, eager to please, introverted, anxious, and less courageous. This comes through in the ways that we remember and how we tell our stories.

Raised together in the same family we had completely different experiences, and every bit of it is true. It's all our consensual reality.

How Will We Know When She is Dead?

The tangled tale of two very different sisters who bonded together to survive a crazy family,

to triumph in adulthood, and finally to reckon with death

The Parent's Guide to Birdnesting: A Child-Centered Solution to Co-Parenting During Separation and Divorce

Take coparenting to the next level and provide a stable environment for your children as you and your spouse begin tackling your separation or divorce.

A Child-Centered Solution to Co-Parenting During Separation and Divorce

Thriving during and after your breakup.